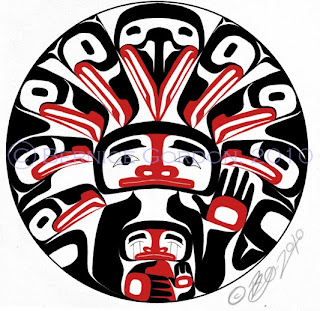 She wanted to have one of three dreams illustrated in the NWP style, and I told her I would only if they wouldn’t break any taboo or infringe on cultural concepts. Lucky that after I reviewed what she wanted, nothing out of the ordinary appeared!

This was the one I wanted to do the most- simply because of the clarity of the image in my head, and the concept within it:

I was taken by the description of all the crows harassing the mother for food, and the mother trying to chide her son into calming down.
I am fond of the archetypes of Protectors, and I wanted to really have that element encompassed in the image with the Motherhood theme. But I also love the symbolic correlation to the birds, and that connection to nature. So I depicted a mother clearly relaxed and "smiling" with one hand up (the palm face forward is a sign of peace and welcome), second hand around her baby who is crying. This symbol is one of motherhood, and motherhood compassion and protection. A common motif in Aboriginal art.
Second, the ring of crows all around the mother- this visually helps that feeling of foreboding the child feels because of being encompassed by so many birds, but the relaxed figure of the mother puts the viewers mind at ease. Also, the birds are not foreboding, and their beaks- while open- not gaping wide... they are also seemingly making a pattern similar to rays of light off the Sun… and almost look like they too are protecting the mother, as opposed to serious threat.

It was a lovely commission with a really great product at the end, and both of us were very satisfied.
Posted by Bernice Gordon at 11:32 PM