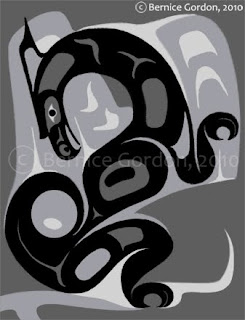 As many people don’t know, part of the North West Pacific tradition of art, is asking permission. A lot of non community members think it's ok to randomly throw together something that looks "in the style" simply because they can, and the style is "cool".
This is NOT the case. Aboriginal art is very deep rooted in the cultural traditions, and many of them have specific rules as to how one draws something, portrays something, or if they even have the right to [which usually means also a ton of taboos that could be broken if not handled right].
This is VERY hard for non-community members to understand because they live a life of self indulgence and entitlement.
I lived and worked within the community for 10+ years now, and if there is one thing I am STILL doing is asking permission. This NEVER stops.

I was in Vancouver, visiting some friends in the local Community. I had the pleasure of going down to one of my friend’s houses and attending a family gathering, that included a lot of members from their community.
During my attendance, I had figured that I would try and “obtain” some permission to do some artwork that breached out of the “norm”. After all, this would be a perfect time, as when the Elders and family gets-together, and they ask if anyone has something to get out in the open... now’s my chance.

Push comes to shove, I asked, discussed, reasoned, and gifted [paid the price] to get the rights to do some stuff. But there were 2 instances I REALLY had to discuss my POV and this picture is a result of one of them.

Most of the Elders were not pleased with the idea that European folklore would be depicted in this style. When I asked about some of the supernatural beings, they plainly refused.
It was only after I brought up the fact that another NWP artist- who is half Irish in decent- already broke that barrier to design a “Dragon”, did some of the Elders shift their consideration. Turns out, it wasn’t that they were against me doing it; simply, they wanted me to fight for it. They wanted me to prove that I had enough of their cultural knowledge, and manners to actually request something of this sort. I was told that if I had been anyone else- including a new comer to the culture, or someone who was just "an artist" with no knowledge, I would be plainly refused. But my investments and dedication to the culture and it's rules is what "won" my right. To everyone else, they would condemn them.
That too, is a cultural mentality.

So because I earned that right, I could post this with a quiet conscious, and silent heart.
Posted by Bernice Gordon at 8:24 PM

I have never heard that you have to ask permission to do artwork in certain style. I always thought that people are free to draw what ever they want. How fascinating!