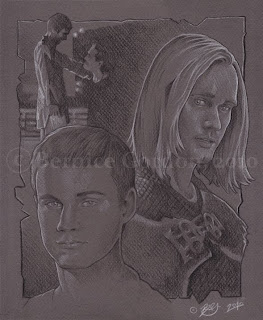 I drew this.. wow, nearly 5 months ago!
I had the flu and figured I'd work on portraiture in order to get my mind off how bad I felt.
I passed out twice while working on it... but it still came out fine. XD
This show is my guilty pleasure. I don't watch TV now-a-days anymore.. but this show and Big Bang are pretty much the only "TV" I watch [cartoons not included. I always watch that].
Posted by Bernice Gordon at 9:57 PM No comments: 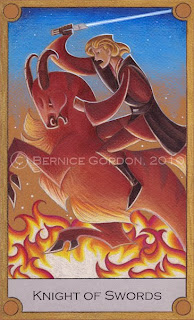 A little note about the “horse” Anakin is ridding. Years ago when watching the prequels (Episode 2 just came out) I was a little disheveled that the “Knights” did not have “horses”. You can’t be a “Knight in shinning armor one a white horse” if there isn’t any horse!
So obviously, I took it upon myself to create horse-like creature, but keep some obvious “alien animal” qualities to it (Dude, ANLTERS!). Of course, since then there were a number of “mounts” used I the SW saga, but I’m partial to my “horse” thing because it’s mine and I think it’s cool and I used to SW RPG with one!
SO THERE.
Posted by Bernice Gordon at 8:58 AM No comments: