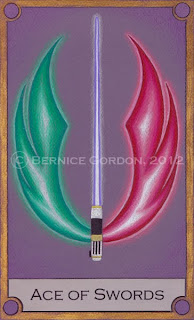 They are BACK! After along hiatus, I resumed making the Star Wars Tarot cards. My goal is for one a week. I was deliberating multiple aspects of this card. First, I originally drew a Padawan/Knight figure holding the sword, but opted to remove any figures for the "Ace" cards simply to avoid any confusions with the "Master" cards of the same suit. Second, was the color of the card- I originally wanted a darker blue color but wanted the Ace card to reflect the "general dominant" color of the suite. After reviewing my previous cards, the dominant "Purple" color prevailed [coincidentally the color of Mace's Sword, who is also the Master of the suit]. When designing this card, one of the images that banged through my head was using the symbol for the Order of the Knights as the actual base concept. I simply punched out a rough concept of fleshing out the symbol to its more physical form- Mace Windu's sword being utilized for the lightsaber of choice [he IS the Master of Swords, after all], all the while the wings reflecting the 2 said of the Force Users. I opted to use Green instead of Blue [for the wing] because of a color theory purpose, more than anything else. The blue made most of the card uniform in its visual presentation, and almost "invisible". Now, my major issue is how to use the same concept with the other suits. Sadly, some of the logos that fit the visual side will not fit the symbolic side, or might imply that the suit is either "good" or "evil". Time to crack that drafting board!
Posted by Bernice Gordon at 9:34 PM No comments: 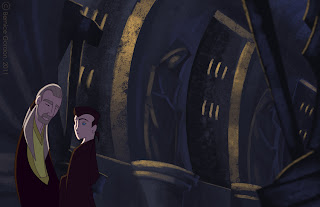 Anyways, one of the things I would often imagine is how it "felt" to be in the Jedi temple. You know, those weird sentimental memories one has of specific ways the specific seasons would reflect in one's home? Like, how the sunlight hit a certain room, or the way the twilight would feel in a specific season... I wanted to try and capture those kinds of moments within the Jedi Temple. So when recreating this interior, I wanted to have a layout that was deeply atmospheric.
Drawing upon a lot of the Buddhist temples, and medieval castle interiors, I wanted to have a "fire lit" corridor. Considering that SW is set in a technologically advanced galaxy, I figured that the torches or fire pots would be replaced by in-wall illumination of the same color.
Gives the same feel, but for a galaxy far far away.
Posted by Bernice Gordon at 1:33 PM No comments: