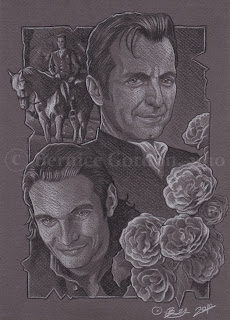 Continuing with the recent theme- uploading work from Oct while I was sick. :)

I personally loved Season 3 of True Blood. I know a lot of fans just couldn't stop complaining about it, but I was on the edge of my seat pretty much the whole season. I also adored Russel and Talbot very much- for whatever their relationship might have been, it was Russel’s “Goodbye to Talbot” speech that had me in tears. I suppose it was because it was frank, true, and honest – and something we don’t get to see in relationships today anymore. Basically; love. Unconditional, and uncompromising.

That, and it was Dennis O'Hare delivering the lines. The sheer awesome of that man performing literally leaves a tear in the fabric of space-time-continuum.

I also noticed a scene where I think Russel was wearing a fish-net like stocking… and I was like DAMN… that DUDE is wearing those far better then I could EVER wear them.
Oh well.
The roses nearly gave me an aneurysm. But they were worth it!
Posted by Bernice Gordon at 4:43 PM