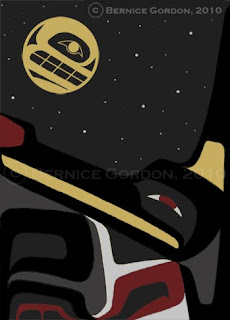 I admit, the black-gold combo was clearly subconsciously influenced by the over abundant images of Anubis in Gold attire from Egyptian culture... but rather then fight the color scheme, I ran with it.
Also, while I was supposed to keep everything monochromatic, this one felt as if it needed the 2 extra colors for effect. All in all, I am happy with how it turned out.

There is a long standing dispute in Aboriginal Myth about the existent of "Jackals". While not called by this term, they are described like "Smaller Coyotes" and darker in color. Conservationist have a similar dispute in regard to smaller Plains Coyote vs. Northern Coyotes that are larger- some even stipulating that the smaller plains coyote is a sub species or a type of jackal.
I decided to run with the theme and illustrate one of these "Small Coyotes".
Posted by Bernice Gordon at 2:49 PM