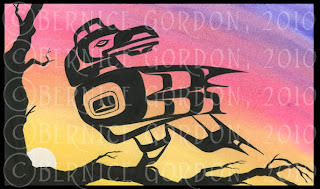 If all that is left are those shadows- let us hope that we can leave behind the reminiscences of good actions, and not the bad- the way Raven left behind the light.
May we leave behind wet-lands and rain forests, good natured people and peace; not the catastrophes of war, and not the the sentiments of extremist ideals and fundamentals that have left the word in anger and hate.
Posted by Bernice Gordon at 8:40 PM