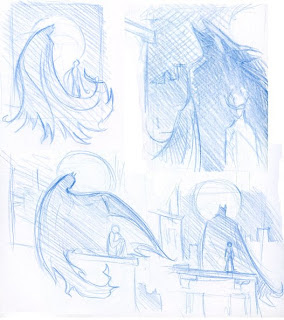 I have been a crazy amount of work lately. It's so varied from drawing to craft making to sewing, I don't even know what to put up first. So I'm working chronologically.
A set of 4 thumbnails I did as a "mini gallery" to figure out which of the four I'm going to choose to polish into a full fledged image. I want to do a "Batman and Robin" image, a la "Teen Titans" or "Animated" Batman. However, depending on the image, I might go for more realism, or comic book style.
I like the idea of Giant Batman towering over a wee little Robin- very "protective father" (Gasp! I said the "F" word!) concept. Inspired by that awesome scene in "Teen Titans" with Robin and Slade ("I already HAVE a father!").
Two images are- literally- "under the wing" types, where as the other two just looming over.
I guess I'm going to put this to a vote. If I have more time, I might do more than one.
Posted by Bernice Gordon at 9:56 PM