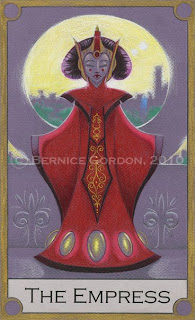 However, it is to note something interesting: I cannot “read” Tarot cards. I have my own deck of cards I “read” from but they are not Tarot. This series is a result of a sort of “epiphany” I had one night… and I decided to run with the idea. After all, Star Wars is full of Archetypes that are found within the Tarot Cards as well, so I decided I would just illustrate what I “felt” fit the image/meaning of the card, and look for the “official” meaning/content after I was done. This way, I wouldn’t be swayed by the pre-conceived notion, but run with my instincts. As an artist (and generally as a person) I run by instinct over knowledge most of the time. My gut is my best intuition so I never ignore it.
What’s funny is after I design the image and then check its meaning- the meaning and my “gut” usually coincide.
Awesome.
Posted by Bernice Gordon at 1:02 PM