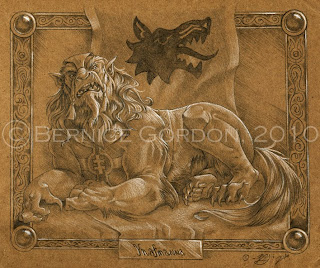 My Second Submission to the Beasts of Yore Portfolio!
After doing the Wasgo piece, I had selected to do a more “common known” beast, but with a personal twist. I went for Werewolf, and playing of the old Hungarian/Romanian (Bohemia) lore and time period, I grew up with.
I adjusted the contemporary “look” of the Werewolf- from the popular “simply a wolf standing on two” design- to something more relevant to the time period of the 15th century and cultural ethnicity, along with a merge of Wolf-and-human anatomy. You will notice the long curly locks of hair that was relevant fashion for the men in that time period, along with the floral design of the frame- predominantly Hungarian. The horse- tack-like apparel/garb he is wearing is also modeled of the actual horse tack of that era in Bohemia.

Watch his blind eye though- approaching him on his right side, might end up being the last dangerous thing you will ever do.
Posted by Bernice Gordon at 10:20 PM

I am interested in your sources, being from Bohemia after all. :)