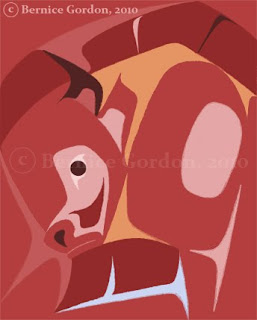 In Ojibwa, "Bison" is called "Mishikode-bizhikeh". This is actually a compound of two words: "Fire" and "Cow".

The reason Bison are called this is becuase the plains on which they live are notorious for burning up- plain fires are common, and would make the Bison flee.
From here stemmed the term; whether it was because the Bison fleeing the fire would make them seem as if emerging from the fire, or perhaps the fact that they were also engulfed in the flames while running, or simply because the local Aboriginals were associating the local environment with the type of cow - it makes for an interesting term.
Posted by Bernice Gordon at 8:37 PM