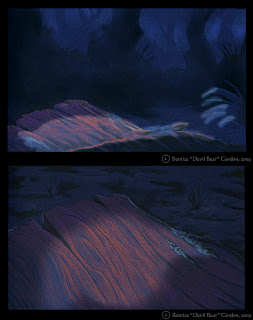 During the course of my work, I was experimenting with my layouts. Specifically, finding out what setting would maximize the display when I scan them into the computer.
When I was scanning them in, I realized that in many scenes Raven will be holding the Moon in his beak... and figured that the close-vicinity area would have to be illuminated to match.
Not to mention, this might have to be animated as well... meaning, I'd have to find a way to animated my backgrounds or a separate light source.
Extra work, but a small detail that would make the film so much more.
So after some time playing around with it, I did it. I found myself a solution that gives a great execution and will demand the least amount of work given the situaiton. Of course, the former is more important to me than the later, but that's something that one has to keep in mind while working with deadlines.
Posted by Bernice Gordon at 3:07 PM